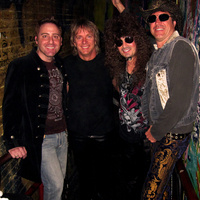 Wanted - Concerts in the Park

WANTED is an incredible replication of the music of Bon Jovi that was created with one purpose in mind... To create a fun concert environment in the style, vibe and atmosphere of the spectacle that is known as a live Bon Jovi show. The band was created after numerous requests from agents and promoters who have worked with the band on other projects, and was two years in the making.  WANTED is based out of Los Angeles California and is comprised completely of established professional national act musicians. WANTED is a slick, rock and roll machine that has played to rave reviews and sold out venues almost immediately after the band's first shows.

Concerts in the Park