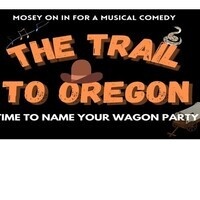 The Trail to Oregon

The most hilarious and historically accurate musical portraying the Oregon Trail to date; featuring 12 educational songs, a set precisely replicating the trail’s landscape, and appearances from famous historical figures, such as: Henry McDoon, Cletus Jones, and Cornwallis.

The musical parodies the series The Oregon Trail. The characters' names are picked from suggestions shouted from the audience, and at the end the audience chooses which character dies.