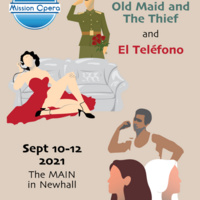 Mission Opera will present two short made-for-TV operas by Gian Carlo Menotti as their season opener on Friday, September 10 through Sunday, September 12 at The MAIN in Newhall. The Old Maid & The Thief will be sung in English with Spanish subtitles and will feature a special guest, Rich Capparela, while El Teléfono (known as “The Telephone”) will be sung as a World Premiere in Spanish with English subtitles.

“The Telephone” premiered 74 years ago in New York City. It was originally a short opener for “The Medium” and both ran on Broadway for a short period in 1947. It revolves around a young GI who has been drafted but wants to propose to his girlfriend before going to service. He is nervous but quickly gets upset when he cannot seem to get her off the phone long enough to pop the question.

"The Old Maid and the Thief" was originally created as a radio opera. It will be staged in chapters of small scenes with narration between as was presented at its premiere in 1939 on NBC Radio with the NBC Symphony Orchestra playing. In this show, we find two women living together, vying for the attention of a man suspected of being an escaped convict. Both women go to absurd lengths to win his heart while keeping gossiping neighbors at bay.