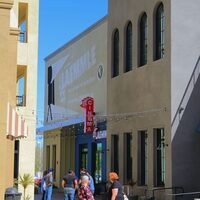 Become part of the next temporary public art piece in Santa Clarita when you step into “The Living Quilt,” a new collaboration between the City of Santa Clarita and California Institute of the Arts’ Professor John Hawk. Students in Professor Hawk’s Videographics class will create a “living quilt” by combining abstract colorful moving imagery that will be projected onto a wall in the Newhall Crossings courtyard near Laemmle Theatre Newhall. “The Living Quilt” will be on display from January 27-29, from sundown to 10:30 p.m.

“The Living Quilt” is a patchwork video creation featuring the work of Professor Hawk’s students and will also feature a public engagement element. A live video camera will be directed toward members of the public viewing the display, and its signal will be incorporated into the art to truly generate a “living quilt.”

The concept of the project centers around quilt making as a communal activity for American frontier women, which became popular during the early 19th century. These social events, known as quilting bees, also meant that quilts could be completed in a matter of days instead of weeks or months.