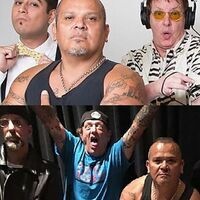 The Dickies were the first L.A. punk rock band to score a major label deal, the first to go to Europe, the first to go insane, and more-or-less the only known survivors from the first wave of punk pioneers. The Dickies have done it all and more and lived to laugh about it. Their uplifting, (some would say zany) pure punk, melodic-pop style has remained in tact for over twenty years!

Ever since the break-up of the Ramones, the Dickies hold the title of being the oldest active punk band in the land. These guys have released records and played punk shows in FOUR different decades. Yowzers! The band’s epic career is matched only by their wacky high-octane live performances. With Stan Lee’s buzzsaw guitar and frontman Leonard’s demented dance moves, the Dickies remain as one of the most rockin’ bands around today.

Coming out of the streets of Fullerton California, D.I. was formed in the shadows of The Adolescents back in 1983 in a studio behind a pawn shop. The Adolescents, Social Distortion, Agent Orange and several other local early punk rock pioneers were the breeding ground from which D.I. was born. D.I. branded their own from of punk rock complimented the Orange County Punk scene in sound and attitude.

D.I. has toured extensively throughout North America and Europe, and everywhere they perform D.I. leaves the audience not wanting the show to be over. The current line up, which many have stated, could very well be the hardest hitting and most cohesive line up ever, made up of Casey Royer on vocals, brothers Eddie and Joey Tatar as the rhythm unit of bass and drums and brought together by lead guitarist Clinton Calton.