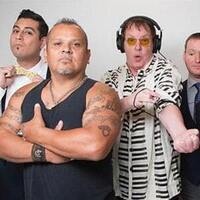 Dickies were the first L.A. punk rock band to score a major label deal, the first to go to Europe, the first to go insane, and more-or-less the only known survivors from the first wave of punk pioneers. The Dickies have done it all and more and lived to laugh about it. Their uplifting, (some would say zany) pure punk, melodic-pop style has remained in tact for over twenty years!

Ever since the break-up of the Ramones, the Dickies hold the title of being the oldest active punk band in the land. These guys have released records and played punk shows in FOUR different decades. Yowzers! The band’s epic career is matched only by their wacky high-octane live performances. With Stan Lee’s buzzsaw guitar and frontman Leonard’s demented dance moves, the Dickies remain as one of the most rockin’ bands around today. No fire-breathing or acrobatic posturing for these veterans; Leonard’s repertoire consists of inflatable dolls, scuba gear, and a large penis puppet named Stewart. Now that’s entertainment!

If you purchase a ticket at a table you are required to purchase dinner. You must arrive by 7pm.

Two Drink Minimum For All

Under 18 Must Be Accompanied by a Paying Adult.