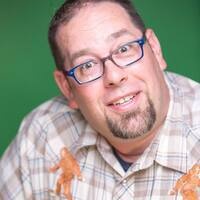 On Saturday November 5th Santa Clarita’s own Jeff Frame will be recording his first comedy special at The Main. Jeff has been a comic for 11 years and brings a unique brand of personal storytelling and relatable insights into everyday situations. With a friendly demeanor and an every-man persona, it’s easy for audiences to quickly feel like they’ve known him for years. He is self-deprecating, honest, & relatable while talking about kids and family, weight issues, and why you should never have parrots as pets.

Jeff is the co-host of the Who Did It First Podcast. He's been seen on season 5 of the FX show “You’re The Worst.” He's also been seen in the Amazing Johnathan documentary on Hulu.

Jeff has won both the San Diego & Minneapolis satellites of the World Series of Comedy & made the Final 9, out of over 400 entrants, at the national competition in Las Vegas.

In addition to being a comic he is also the director and producer of the Comedy documentary “Bert Kreischer: I Am The Machine.”