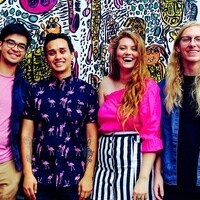 Prussia - Concerts in the Park

Join us Saturday, July 20 for Concerts in the Park, presented by Logix, featuring Prussia.

Prussia is a 4-piece funk powerhouse based out of North Hollywood, California. Fronted by a dynamic female vocalist and grooving rhythm section, they are known for their electric live performances and unique blend of blues, funk, and soul. Described as “West Coast Funk,” each member of the band hails from different parts of the world (Venezuela, Georgia, Pennsylvania, Los Angeles) but met while studying music in Hollywood.
Prussia released their first EP Glory Days in 2016 and will be releasing new singles later this year.
The band has won 2 Downbeat Student Awards for Outstanding Performance in the Pop/Rock/Blues category.