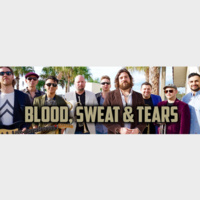 Your tickets from the previously scheduled event will be honored on this date.

No one can argue BS&T invented a new style of music.

Blood, Sweat & Tears is not the first band to ever use a horn section, but they are the first to fuse it with rock, jazz, and some blues thrown in for good measure.

Blood Sweat & Tears has had many configurations over its 50+ years of touring, but one thing for sure is that the music is timeless, and fans are never disappointed.