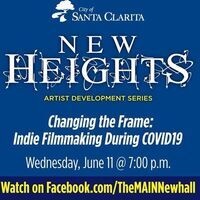 Join us for Changing the Frame, a workshop featuring independent filmmakers creatively adapting to the pandemic. This panel will highlight innovative ways to create while sheltering-in-place. Panelists will also discuss new realities facing indie filmmakers when production resumes, networking from home, and the ways that pre-production, post-production and distribution are shifting because of the pandemic. Panelists include Michael DiBiasio-Ornelas and Iram Bilal with moderation by Jennifer Fischer.

MICHAEL DIBIASIO-ORNELAS is an award-winning Writer/Director from Brooklyn, NY. He is currently sheltered at home with his wife, pup, and his awesome newborn daughter. Michael's films include features The Sleepless, The Videoblogs, and recent shorts Bench (Best Writer, Long Shorts, Alternative Film Festival) and Naked (New Filmmakers NY).

IRAM BILAL
Raised in Nigeria and Pakistan, Bilal is a Physics Olympian turned filmmaker. Her third feature film, I'LL MEET YOU THERE, a family drama about a Muslim cop and his teenage ballerina daughter, was 1 of 10 films in narrative competition at SXSW2020. She was 1 of 15 directors invited to Cinefondation's L'Atelier at Cannes 2019 for her feature project in development, WAKHRI (ONE OF A KIND). Her past noted feature length works include Josh (Against The Grain), Pakistan's first film to be on Netflix and in the permanent selection at the US Library of Congress.

JENNIFER FISCHER is a filmmaker, arts educator and film curator. To date, her films have screened at more than 65 film festivals and garnered 15+ best of awards. Her multi-award winning feature film, SMUGGLED, saw her tackling self-distribution, successfully securing theatrical screening events at universities, colleges and community organizations through the United States and abroad. She founded and ran the Santa Clarita Valley Film Festival for 7 years. Indiewire recognized her Film Articles and Resources Pinboard as one of the Top 10 Pinboards for indie filmmakers to follow. She holds a B.A. from Sarah Lawrence College and an M.A. from Harvard University.