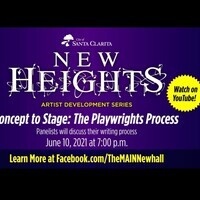 The City of Santa Clarita City Council and Arts Commission is proud to present the New Heights series, which is designed to assist artists, performers, and arts organization representatives to expand their knowledge and to learn valuable tools to increase their ability to be successful. The series comprises workshops, panel discussions, and art trips that are designed to engage creative individuals, no matter what level of experience.

Panelists participating in this virtual discussion will talk about their writing process. Learn about all of the steps to create a play from an initial concept to a finished piece that is ready for the stage! These published playwrights will also provide you with some tips and tricks.

Kitty Burns
Fairytales really do come true, which was proven to me in 1991 when my first play was published by Samuel French. Four more were published later, and all have been produced world-wide. I have had the privilege of seeing many productions of my plays in various parts of the country, which is a thrill I can't even put into words.

Anthony Aguilar
Anthony Aguilar is a writer who was born and raised in Boyle Heights, California. Written works include the punk rock musical, Little Red, the superhero series El Verde, El Verde: Career Day, and For One Mariachi. He was commissioned by Center Theatre Group’s The Shop initiative for his stage-plays Emma & the Suzies, and Annazul.

Wade Bradford
Wade Bradford has written over 40 plays for teen performers. His plays and musicals have been produced on six continents, and it frustrates him to know there’s one hold out left.