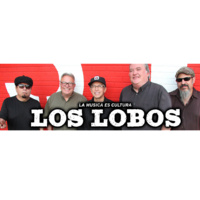 “We’re a Mexican American band, and no word describes America like immigrant. Most of us are children of immigrants, so it’s perhaps natural that the songs we create celebrate America in this way.” So says Louie Perez, the “poet laureate” and primary wordsmith of Los Lobos.

More than three decades have passed since Los Lobos released their debut album, Just Another Band from East L.A. Since then they’ve repeatedly disproven that title—Los Lobos isn’t “just another” anything, but rather a band that has consistently evolved artistically while never losing sight of their humble roots.

Their music is influenced by rock and roll, Tex-Mex, country, zydeco, folk, R&B, blues, brown-eyed soul, and traditional music such as cumbia, boleros, and norteños. It gained international stardom in 1987 when their cover version of Ritchie Valens’ “La Bamba” topped the charts in the U.S., the UK, and several other countries. In 2015, they were nominated for induction into the Rock and Roll Hall of Fame.