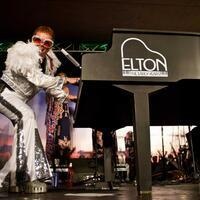 Kenny Metcalf as Elton - Concerts in the Park

Kenny Metcalf as Elton & The Early Years Band is the Ultimate Elton John Tribute show. They were recently hand-picked for Mark Cuban and Ryan Seacrest's network AXS TV show "THE WORLD’S GREATEST TRIBUTE BANDS." They wowed a national audience during their live-to-air performance at The Roxy in Hollywood California, and are known for performing a technically accurate Vegas-style production, featuring the wildly popular music, costumes and antics of Elton John.

“Elton” as portrayed by Kenny Metcalf, has the voice and appearance of Elton John in the early years. From rhinestones to sequins, every detail has been meticulously recreated. Iconic costumes finish the illusion, including the infamous Los Angeles Dodgers uniform designed by Bob Mackie, and glasses (created for Elton himself) by Ray Winston.

Those fortunate enough to have seen Elton perform live experience a sense of “Deja Vu” while watching this captivating performance. Audiences and critics alike leave with a sense that they “saw” Elton and his band. Elton's first producer and original lead guitarist Caleb Quaye stated that witnessing this performance is like re-living infamous shows such as the one Elton performed at Dodger Stadium in 1975.

Concerts in the Park