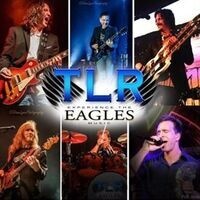 Eagles Tribute by The Long Run

Since their debut in 2000 THE LONG RUN – Experience The Eagles has earned its place among the top-drawing tribute acts in North America and is widely regarded as the finest Eagles tribute show working today. Handpicked to perform the music of The Eagles by Mark Cuban’s & Ryan Seacrest’s network AXS-TV, their 90-minute live concert for the hit TV show “The World’s Greatest Tribute Bands” was broadcast to millions of viewers over five countries. The show received the highest ratings in the series’ history resulting in an unprecedented 2 invitations to return in subsequent seasons for encore appearances.

Marked by lush vocal harmonies and exceptional musical accuracy, every TLR performance delivers a reverence for the beloved,
Eagles recordings blended with The Long Run’s own live-concert personality.

Opening set by Ghost in the Machine

Under 18 Must Be Accompanied by a Paying Adult.