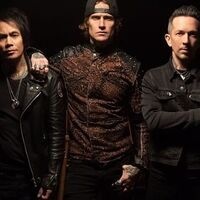 Buckcherry aren’t afraid to push buttons. This is the band that vaulted to stardom on the dangerous and dirty fuel of the 1999 smash “Lit Up” from their gold-selling self-titled debut. Every time it plays to this day, somebody’s clothes come off—and that’s a fact. These are also the boys behind the rousing, raucous, and raunchy “Crazy Bitch” off 2006’s 15, which turned them into a multi-platinum phenomenon and a household name.