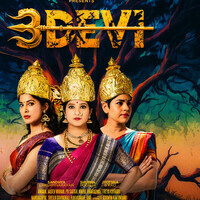 This film is being screened as part of The MAIN Theatre’s Through the Lens: Global Film Series. Enjoy a FREE screening, meet the filmmaker and meet others interested in film.

“3Devi” is a riveting story of three women, a leading actress (Vijayalakshmi), an entrepreneur and bride-to-be (Maria), and an assistant director (Sharanya), who are fed up of the male chauvinism in their respective fields. On a particularly trying day, the actress and the assistant director leave their film set during a shoot, while the bride leaves her groom at the church altar. The three women band together and take off on a roadtrip away from their problems. But a sudden turn of events forces them into a battle for their lives. The only way to survival then is by invoking their inner goddesses/ 'devis'.

Through the Lens: Global Film Series
Explore the world through the unique perspectives of filmmakers from various countries and cultures. This series will showcase contemporary film shorts and features that will transport viewers, tell entertaining and exciting stories, and expand the opportunity to encounter diverse points of view about life in the 21st century. Through the Lens free screenings will be held at 7:00 p.m. on the fourth Thursday of each month.