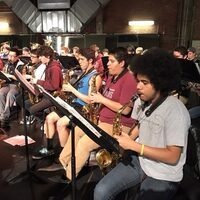 The Hart School District presents its annual honor band concert. Top junior high and high school student musicians from throughout the Hart School District will perform at the Hart High School Auditorium. The more than 175 students from local junior high and high schools were selected from a field of more than 800 talented students.

The annual concert is directed by guest conductors who are either university directors or other prominent music educators.

This year, the high school honor band will be conducted by Dr. Lawrence Stoffel from California State University, Northridge. Professor Stoffel is in demand as a guest conductor and clinician throughout California and the United States. He is also a local resident of Santa Clarita.

The junior high school honor band will be conducted by Randy Gilpin, who served as an instrumental music director in the William S. HArt Union School District. He served at both Canyon High School and Rancho Pico Junior High School.

Several honor scholarships will be presented at the concert.