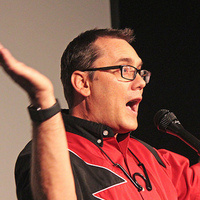 10 by 10 is a variety night giving performers a chance to take the stage and perform for a live audience. Each month, ten performers will be selected to perform a 10-minute piece of their choosing, such as, short live theatre pieces, dance, monologues, improv, comedy, and music, and more.

This week, the cast includes:

STORYTELLING from Sharon Houston
Sharon is a stand up veteran who has appeared on MTV, Comedy Central, and VH1. She’s starred on several hidden camera shows including MTV’s “Punk’d”, Disney Channel’s “Code 9”, and Oxygen’s “Celebrities Undercover.”

MUSIC by Alex Wand
Alex is a LA-based, Grammy Award-winning performer and composer who has performed at venues and festivals throughout the globe. Currently he writes for film and video with recent projects including The Harvest Run (full-length documentary) and Porcupine (dramatic narrative starring W. Earl Brown).

MAGIC with Brian Hoffman
Brian is an active magician and a member of Ring 280 of the International Brotherhood of Magicians in Santa Clarita.  Brian is also a Magician Member of the World Famous Magic Castle.

STORYTELLING by Vicki Juditz
Vicki Juditz has performed stories all over the world winning both Moth StorySLAMs and GrandSLAMS.  She has had comic roles on Everybody Loves Raymond, YES, DEAR, My Name is Earl, and others.

COMEDY with Steve Saracino
Steve is an actor, writer, and also does music composition, musical theater, musical theater direction, improv, and is even a classroom teacher, and a successful varsity baseball coach in San Diego.

FILM SHORT   “The Reinvention of Normal”
“The Reinvention of Normal” is a short film that follows Dominic Wilcox, an artist / inventor / designer, on his quest for new ideas….Taking the normal and turning it into something unique. Directed, filmed and produced by Liam Saint-Pierre, this charming film celebrates the joy of creativity and invites us all to reconsider what it means to be normal.

COMEDY with Jeanne Whitney
Jeanne is a comedian who performs nightly in Los Angeles, and all over California and the Midwest.

STORYTELLING by Kim Kalish
Kim Kalish has been seen on Conan, at all the Upright Citizens Brigade stages and oh so many basement bars in New York and LA. She’s produced viral videos that went international (you haven’t lived till people are tweeting at you at 2 in the morning in Polish), has been LA Weekly’s Pick of the Week, and has performed in numerous comedy festivals. Most importantly, she’s a lover of goat cheese and toast. Put those two things together and watch the sparks fly.

MUSIC with Steve Messick
Long-time local of Santa Clarita, Steve Messick brings to the stage a vibrant and entertaining repertoire from around the world.  Inspired by a passion for travel, Steve and his accordion will whisk you away on a musical journey through the international sounds of destinations abroad.

MUSIC with The New Mexican
The New Mexican is 10 by 10’s “house one-man-band” playing a blend of country blues featuring banjo, harmonica, guitar, and percussion.